Three weeks after Mr Trump was elected president, optimism is spreading, driving down gold prices and the US Dollar while 10Y yields go up. Those of you who read our previous post remember this isn’t what we predicted. What caused the market to behave against all predictions? That’s what we’re looking at in this week’s post…

After an incredibly volatile period, the price of gold is back to where it was almost six months ago, returning all the upside it gained and settling around $1,190/oz. Since May 2015, gold prices have rallied thanks to increasing uncertainty about the aftermath of significant macroeconomic events like the US elections, the UK referendum, the Deutsche Bank settlement and the Fed rate hike, and general geopolitical concerns.

The yellow metal surged 13% between May and July, reaching the highest price since March 2014 fueled by rate hike estimations and UK referendum results. Since then, gold prices went sideways until the Deutsche Bank settlement eliminated a large portion of the market uncertainty and triggered a 4% drop in price, followed by another 5% decline after the US elections. Why have the US elections impacted gold prices this way?

In our analysis, gold prices declined after the US elections because of the decrease in market uncertainty regarding who would be leading the US economy in the next few years.
Speculators used this to their advantage (…some to their disadvantage) and we saw trade volumes increasing the closer we got to Election Day.

Another reason is likely to be Mr Trump — markets seem to accept him as “good for business.”
His fiscal policy statements about actions to boost the US economy have created a positive sentiment towards stronger economic growth. His statements about increasing investments in infrastructure, tax reform aimed at strengthening local businesses and import reforms to prioritize local businesses have increased growth expectations and triggered a risk-on trend in which cash flows from gold-backed securities to risky assets like equities.

Growth expectations drive significant outflows from gold-backed securities, and strengthen the dollar, weakening gold prices even further, as most of the gold traded globally is denominated in dollars.

When substantial outflow pressures gold prices down, and the dollar rate pressures the price further, it creates a strong correction in gold prices, as we’ve witnessed in the last three weeks. Furthermore, the upcoming rate hike has triggered a rise in Treasury yields coupled with significant outflows from Treasuries to risky assets, accelerating the risk-on process and adding additional pressure to gold prices. 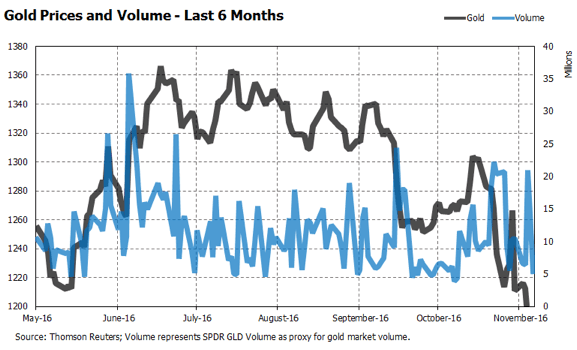 The chart above shows gold trading volume peaked around key macroeconomic events like the UK referendum, Deutsche Bank settlement and US elections. Looking forward, the Italian referendum and the December rate hike will contribute to gold volatility until the end of 2016. Trump stepping into office in January and the French and German elections in 2017 suggest that volatility in volume and price will continue into next year.