Gold Reserves- What Central Banks were Doing in 2016

Historically, gold’s role in the global economy has been as the ultimate safe-haven asset. Its value has been closely tied to our perceptions of global stability.

Central banks use gold to shore up monetary stability. Fluctuations in a country’s gold reserves reflect how its central bank perceives the future of large-scale macroeconomic development.

In the desperate search for economic stability that followed the 2008 financial crisis, governments worldwide showed a newfound interest in gold. Interestingly, it was primarily emerging economies that actually increased their gold reserves. Of special note were the largest buyers: China, Russia, Turkey, India, and Kazakhstan. 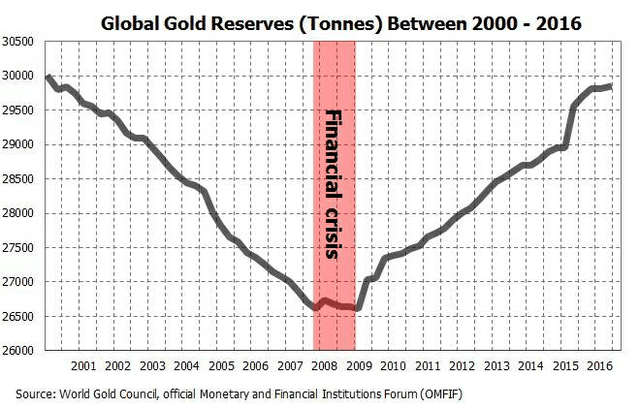 Notes for the graph:

Up until the 2008 crisis central banks were reducing their gold holdings at an average rate of 100 tonne per quarter. Over 161 tonne were sold in Q3 of 2007 alone.

The trend was reversed after the crisis and central banks have been steadily increasing gold reserves at a rate of 111 tonne per quarter since. Over 431  tonne were purchased in Q2 of 2009 alone.

This trend has accelerated these past three years, primarily due to actions taken by China, Russia, and Kazakhstan, who together have accounted for the majority of net change.

It’s plausible to assume that increasing global political instability, and the inevitable macroeconomic headwinds it generates, will drive central banks to continue buying gold in the near future.

Let’s look a little more closely at some of the major players:

“Gold forms the very material basis for modern fiat currencies. Gold is the world’s only monetary asset that has no counterparty risk”

Since 2008, the People’s Bank of China has substantially increased the role gold plays in the Chinese economy. Since the beginning of 2015, China has increased its reserves to 784 tonnes, accounting for 6% of the official sector gold reserves.

These measures are taken as the PBOC seeks to support the local consumer market and add stability to an economy dealing with a continuous slowdown in growth rates, outflows of cash, a depreciated Chinese yuan renminbi and the impact of the U.S. Federal Reserve rate hike.

The second-largest buyer of gold since the 2008 crisis is Russia. Similarly to China, Russia sees gold as a means to add stability to its economy and financial system.

In recent years, Russia has faced macroeconomic challenges, in particular after the Crimea crisis and the resulting international economic sanctions. A dropping ruble and falling oil prices have driven Russia into dire financial straits that hurt the local economy and pushed down the country’s FOREX reserves.

In response, the Central Bank of Russia nearly doubled its gold purchasing, acquiring 501 tonnes since the beginning of 2014 – similar to the amount Russia purchased between 2008 and 2014. Russia’s incredible increase in gold reserves drove 36% of the world central banks’ net change.

Even though Kazakhstan accounts for only 0.7% of the total official gold, it accounted for 6% of the overall central bank’s net change since 2008. Asset diversification was a primary driver behind the gold reserve increase of 174 tonnes (262%), as part of a larger strategic national plan that included the government buying the output of all local mines. Besides Russia and China, Kazakhstan is the only other country that has increased its gold reserves significantly in the last three years.

Although it accounts for only 1.4% of the world’s gold reserves, Turkey accounted for an astonishing 11% of central banks’ net change in reserves since 2008.

Over the past few years, Turkey has faced serious political and macroeconomic challenges. The influx of refugees from Syria and Iraq, coupled with massive protests and a coup attempt have triggered a broad financial crisis which resulted in economic instability and a significant depreciation of the Turkish lira.

The situation drove the Central Bank of the Republic of Turkey to accelerate gold purchases and increase gold’s use in the country’s interbank system. Turkey added 339 tonnes, which drove a 292% increase, the highest increase in the official sector since the crisis.

India drives 27% of the worldwide consumer demand for gold and strives to also play a bigger role in the world’s gold market. To support that goal and the vibrant local consumer market, the local central bank acquired 200 tonnes. That increase its gold reserves 56%, which accounted for 7% of the world’s official sector’s growth.

Together, the United States and Germany hold a third of the world’s total gold reserve. Both countries have done little to modify their holdings in recent years, with the prevailing wisdom being they wish to avoid any possible global destabilization that their actions might cause.

The significant macroeconomic events that took place in 2016 drove substantial fluctuations in gold’s pricing – It touched a five-year low of $1,066/oz in January 2016, but reached a three-years high 6 months later with the gold price of $1,366/oz.

Speculations about the U.S. election results, the U.K. referendum and other key geopolitical events influenced gold prices in 2016 and this trend will likely continue in 2017 – Key elections in the Netherlands, France and Germany, Donald Trump’s first year in office and U.K. progress towards leaving the EU will likely lead to greater geopolitical risks, which may benefit the gold price. Rising inflation expectations in the U.S. and concerns over-inflated stock market valuations worldwide will likely also contribute to an increase in gold prices this year.

A survey conducted in the fourth quarter of 2016 by the World Gold Council found that 56% of central banks intend to increase their gold reserves over the next three years, while 11% plan to maintain their levels of gold reserve. That delivers a strong statement that central banks worldwide believe the role of gold in the global economy will continue to strengthen and drive demand from the official sector. 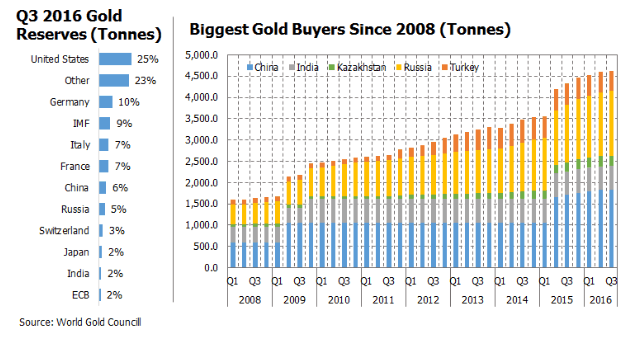