The Secret Advantage of Gold 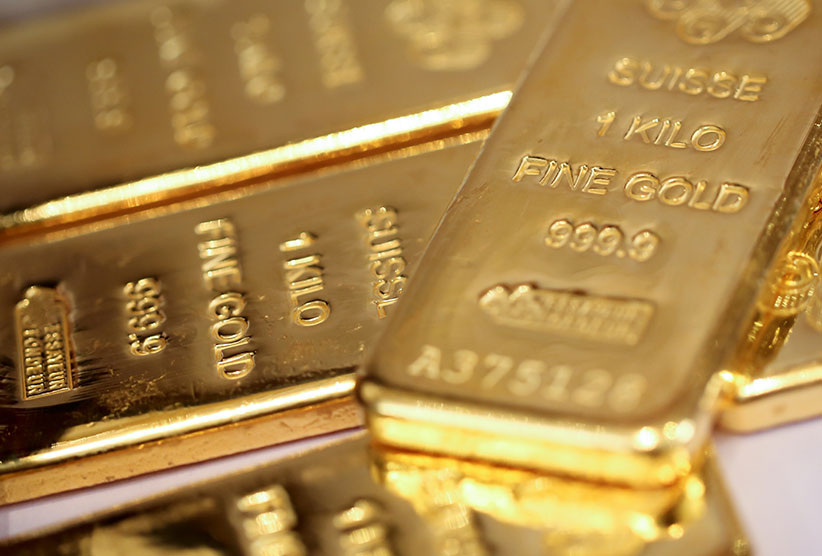 Nowadays, stocks are all the rage.

The Secret Advantage of Gold in 2021 – The major indices at the New York stock exchange are setting record highs on a regular basis. Even though economies across the world are still struggling with the effects of the COVID19 pandemic, stock market investors are extremely optimistic. This is evident by the Buffett indicator (the ratio between total market capitalization and the US GDP) – exceeding 200% for the first time in history[1]. Who can blame them? The past decade has been fantastic for equities. The bull run which began after the 2008 financial crisis has continued unabated, with only a few brief corrections. In such an environment, there is reduced demand for safe haven assets such as precious metals. Although the price of gold is up almost 70% since its 2015 low, it remains an under-owned asset, with global allocation standing at only 2.5%[2]. The average investor appears to believe that there is little need for protection, and that in the long run the stock market always prevails. But is that really the case?

In order to answer this question, we have taken a look at the long term returns of the two most common asset classes, which are stocks and bonds, and compared them to gold. As a benchmark for stocks, we have used the S&P500 index, and for bonds the US 10 years treasury note. In both cases we have included the accrued dividends or yields and re-invested them. All data has been inflation adjusted according to the US consumer price index, to reflect the true purchasing power of each asset class. To simplify matters we did not include any taxes or fees that might have been incurred.

As a starting point we have chosen the year 1968, in which the London gold pool collapsed and gold once again became freely traded. To be honest, the starting date of any such comparison is crucial. If we were to choose for instance the year 1980, in which the gold price had a major top, the results would have been dramatically different. But we believe that the chosen time series gives a fair and balanced representation of the performance of each of these assets.

As you can see on the chart, the results are very interesting. Each asset class has had its share of good years and bad years. Gold, for instance, has greatly outperformed both stocks and bonds during the stagflation of the 1970’s, and again after the collapse of the dot-com bubble in the year 2000. In its worst year, which was 1981, the price of gold lost some 35.6% in real terms. This however came right after its best year, in which it had gained a whopping 86.7%. Overall, during this time period gold has produced an inflation adjusted return of 702%. This is equivalent to an annualized real return of 3.75%. Not bad for safe haven asset, which doesn’t generate any income and simply sits in your vault! 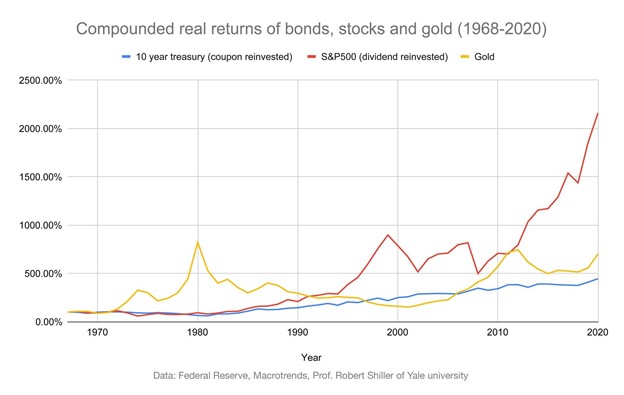 Although the bond market is usually regarded as stable and boring, it too had some wild years. Its worst performance happened in 1980, just as gold was having its best year ever. In that year, the 10 years treasury note lost some 12.5% in real terms. No wonder that back then bonds were colloquially known as “certificates of confiscation”. Its best year was 1982, after the high inflation of the 1970’s was finally tamed and interest rates across the world started dropping. In that year, the 10 years treasury note produced a real return of no less than 34.1%. Overall, since 1968 the 10 year has produced a real return of 446%, which is equivalent to a meager annual return of 2.86%. This makes it the worst performing asset of the three. Its only redeeming quality is its relative stability and lack of volatility.

Unsurprisingly, the best performing asset of the three is by far the S&P500 stock index. Including dividends, since 1968 it has yielded an amazing real return of 2,163%. This equates to an almost 6% real annual return. This impressive performance comes at the cost of some considerable volatility. During the financial crisis of 2008 the S&P500 lost 39% of its value in real terms. Another notably bad year was 1974, in which it lost over 35%. Naturally, the S&P500 index has also had some large intra-year corrections, such as the one that happened in 1987, in which it lost 36%, or the recent one in March 2020, during which it dipped by 35%. Our analysis does not reflect this kind of volatility, since it was done on an annual basis.

Due to this type of price action, very few people have the courage to invest all of their savings in the stock market. As we all know, most asset managers advise their clients to allocate a large portion of their portfolio to bonds, in order to mitigate the volatility. A classic portfolio would hold equal parts of stocks and bonds, and rebalance them quarterly or annually. The rationale for doing so is that money is constantly transferred from the best performing asset to the least performing asset, thus locking in the profits and preserving capital for the next cycle of growth. 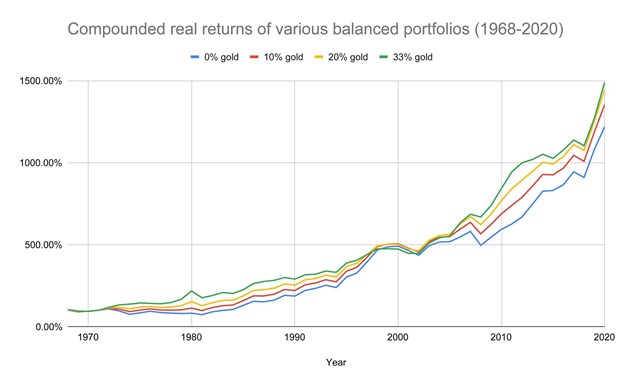 However, the big mistake that asset managers nowadays are making, is neglecting to include gold in the mix. In order to demonstrate this we have calculated the potential returns of a few balanced portfolios over the time period since 1968 until today. The first portfolio contains equal amounts of stocks and bonds, with no allocation to gold whatsoever. The other portfolios contain 10%, 20% and 33% gold each, with the rest equally divided between stocks and bonds. The results are quite remarkable. The portfolio which contains no gold had the worst performance, with an overall return of 1219%, or an annualized real return of 4.83%. The portfolio which contained 10% did much better, with an overall return of 1,354%, or an annualized real return of exactly 5%. The portfolios which contained 20% and 33% gold did even better, with overall returns of 1,446% and 1,490% respectively. But in our view the most impressive thing is the stable performance of the portfolios which contained gold. Notice how they softened the blow during the dot com bust of the year 2000, and even more so during the financial crisis of 2008.

How could that be? How can the introduction of a volatile asset such as gold reduce the overall volatility of a portfolio? The answer is simple and ingenious. Gold is a counter-cyclical asset, which performs best during times of crisis. Accumulating gold during years in which the stock market is generating high returns allows us to avert the worst of any downturn and preserve capital for the next cycle of growth. It performs this task better than bonds, because bonds are extremely vulnerable to inflation. Most asset managers have probably forgotten this – since the global economy hasn’t experienced high inflation in over 40 years. But In an environment of historically low interest rates and record breaking government debt, the risk of inflation is rising. We may yet be reminded of the secret advantage of gold.